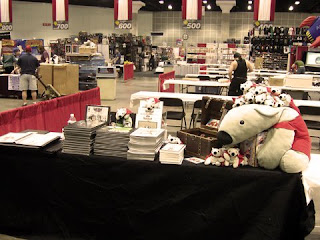 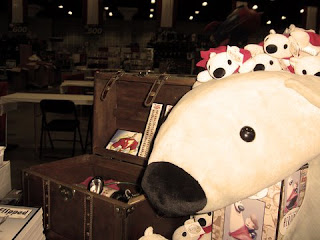 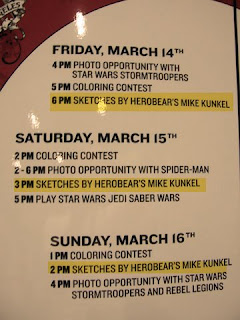 well, it was a great weekend. lotsa fun and a lot of great people came by.
thank you to all of you.


i went to the kids area once a day and did sketches for the kids that were at the con and hopefully helped them have an even more good time at the show.
me and my kiddos, my wife and my brother in law all had fun at the booth/table. there was a lot of excitement for my upcoming Captain Marvel series, so it was fun to share some new images with everyone and talk about it with the fans. everyone was super anxious and supportive of it.
thank you all so much! :)
my son got to have fun in the Guitar Hero competition, my daughter did drawings and helped protect the giant Herobear Plush so no one would sneak off with it. ;) we had a number of people wanting our mascot, but he is the guardian of my kiddos so i can't let this particular one go. maybe we'll make some official ones someday. :) all in all, it was a fun time . . . 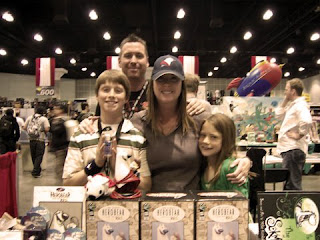 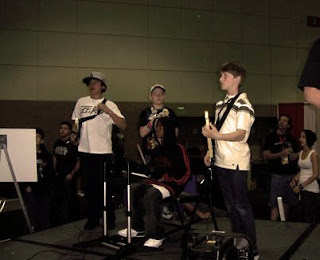 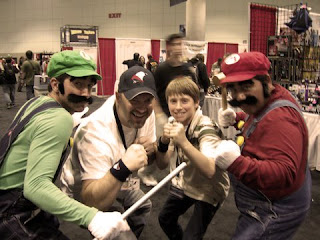 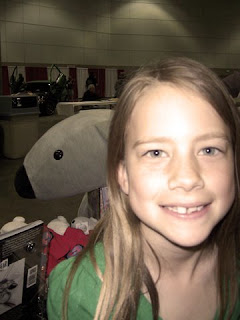 there was also of course a bunch of amazingly talented artists and writers all around. i'm always in awe of the people around at conventions . . . .some friends and some that i got to meet finally. . . Darwyn Cooke, Dave Bullock, Daniel Bradford, Tim Bradstreet, Cheeks!, Danny Miki, Michael Golden, Jimmy Palmiotti, J. Scott Campell, Jeph Loeb, and plenty more.

i got to know Michael Golden at the Arizona Convention and he's been a great guy, really supporting and enjoying Herobear. i'm tremendously honored that he enjoys it. . . 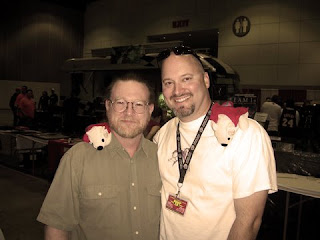 Danny Miki was there too. he got to enjoy peeking at the Captain Marvel Transpositioning Decodifier . . . 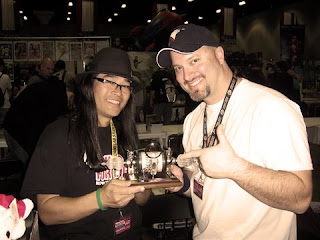 also, friends from DC were there . . . Dan Didio and Bob Wayne( on the ends) and also, the amazingly talented Darwyn Cooke(yellow hat) . . . 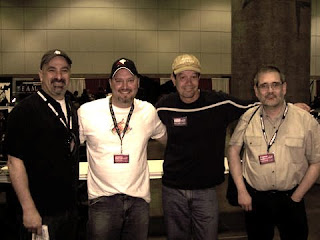 finally, what would a convention be without Peter Parker and his girls. this group was walking around the convention saying hi to everyone. i thought it was a brilliant "group" costume. Peter and all his loves . . . aunt may, mary jane, betty brant, black cat, and gwen stacy. turns out they allllll love Herobear. who knew? ;) 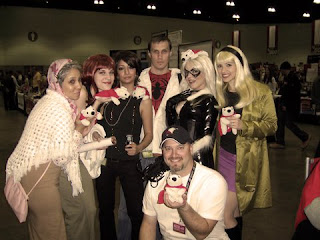 anyway. . . all this babbling to say that i had a lot of fun this weekend and i wanted to say thank you to all the fans and new fans that came by. thanks so much!
some fans were wondering if we sell the Herobear and Sokmunster stuff online and i said, "Oh yess! i'll even autograph it for ya. " :)
so if you are looking for anything, please visit the Astonish Store for our books and stuff.
:)

all the best,
mike . . .
p.s. alsoooooooooooodon't forget to check out the Decoder give away from this convention that i'll be posting on the Shazam blog. also some other updates on things and lotsa goodness. :)
Posted by mike . . . at 3:47 PM 5 comments: 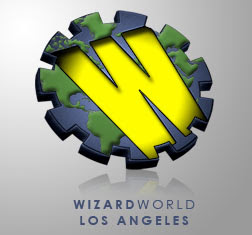 just wanted to let you know that i'll be at Wizard World LA this weekend!
hope to see you there. i'll be in artist alley, so here's my table/booth info . . .

it should be a lot of fun!
we'll have lotsa Herobear and Sokmunster stuff. you can see the upcoming Lunchbags stuff. and alsooooooo, #3 of the Captain Marvel Decoders will be there and will be presented to a verrrrrry lucky fan.
:)
so please stop by!